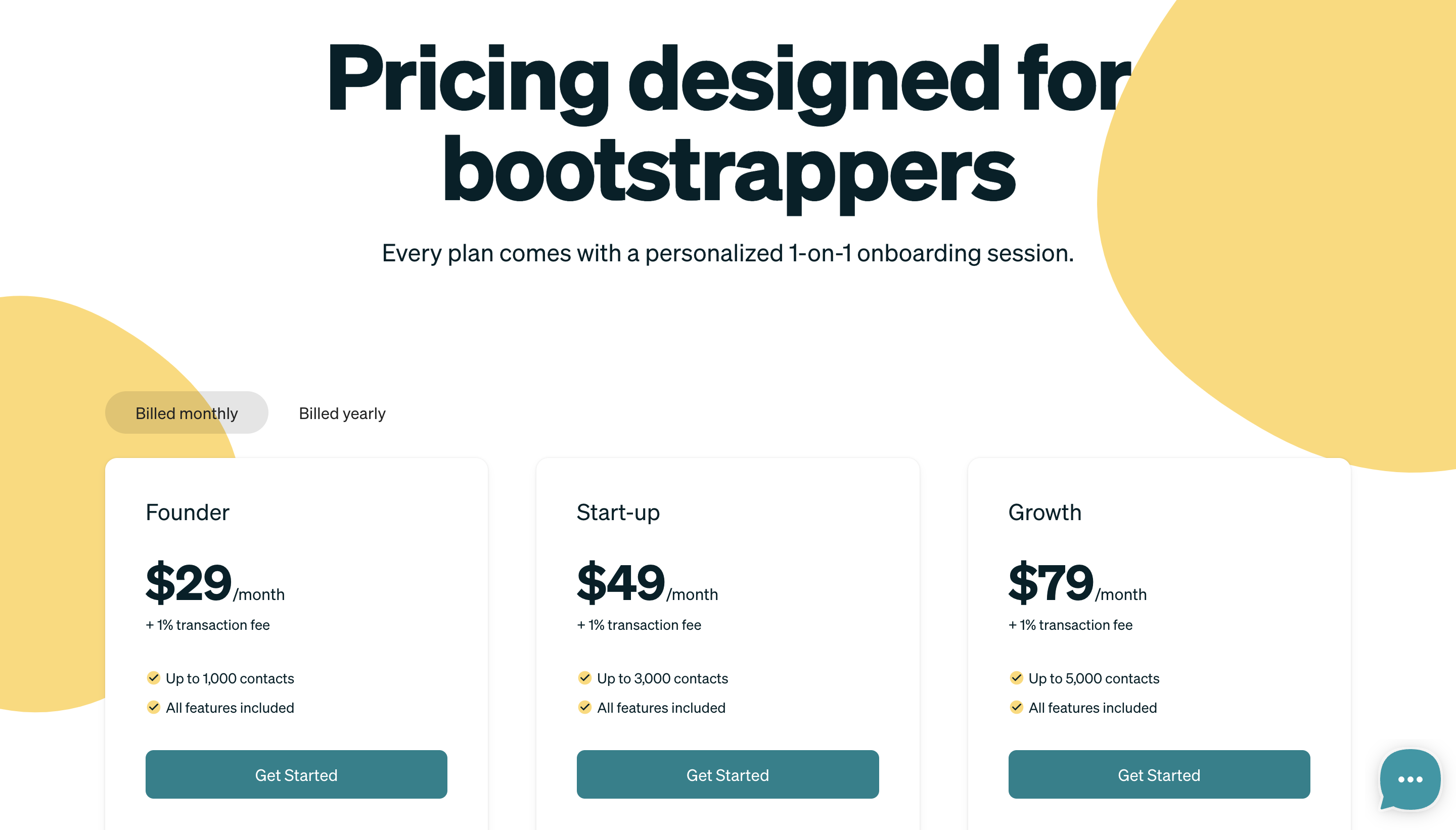 As 2021 was winding down we were, quite frankly, getting our asses kicked. More than 5,000 businesses were using Outseta but the majority of them were on a freemium plan. Our team of 5 was trying mightily to keep up, but we just weren't able to deliver the level of service to thousands of users that we wanted to. Something had to give in order to bring some sanity back to our business and team.

The freemium plan itself was incredibly customer friendly and well intentioned. We sell primarily to bootstrapped start-ups, so the plan was designed to give users access to all of Outseta's features for free so they could test the product and onboard at their own pace. The only restriction was that users could only have 25 contacts in their Outseta account before they were asked to upgrade to a paid plan. In many ways this worked wonderfully —as soon as customers started using the product in earnest, they'd inevitably move to a paid subscription.

In all honesty, I loved that model and I still do. The entire thought process behind our pricing model was "build the most customer friendly acquisition model possible," and I can't fault us for that. But as a small bootstrapped team it simply wasn't tenable—these are the costs of bootstrapping that don't get discussed enough.

Time spent supporting freemium customers almost completely consumed the time that I should have been focused on marketing, the time that my co-founders should have spent delivering product improvements for our paid customers, not to mention a good deal of our sanity. And support volume aside, it resulted in a lot of users with almost no urgency to convert to a paid subscription—many would linger on our free plan for 6 months or a year, all the while looking to our team for help on a variety of issues.

We needed to reclaim our time so we made a bold decision albeit a defensive one—we ditched the freemium tier altogether, forcing users to sign up for a paid subscription if they wanted to use Outseta. I was enormously skeptical of this experiment, but without question it worked. In the 5+ years that we've been building Outseta, we've generally grown slowly and steadily—there have now been two growth experiments that significantly altered our trajectory. The first was the no-codification of Outseta. The second removing our freemium tier and asking users to sign up directly for a paid plan.

No freemium, no trial period, nada.

My reservations with running this experiment

Let me make one thing very clear—the last thing I want to do is come off as flaunting the fact that we ran an experiment that forced users to pay us for our product immediately! Not only was I highly skeptical about whether or not this experiement would work, but I was also pretty uncomfortable with it for a number of reasons.

First, there was no way for users to try Outseta without buying it. All of our competitors offered a freemium version or free trial during the time that we ran this experiment—I like to try software products myself before I buy them.

I tried to combat this as much as possible with our Sales Pitch page, which gives users access to a full length product demo as well as the ability to book a 1-on-1 call where we take them through the product. I also integrated Damon Chen's wonderful product Testimonial.to with our pricing page—I think this was a pretty critical step in increasing buyer confidence as they were able to read reviews directly from our current customers. I'm sure this made it easier for many people to pull out their credit card and take a leap of faith on our product.

This all worked reasonably well, but without question plenty of people were turned off by the fact that they couldn't kick the tires on the product before buying it. I totally get that. We received a good number of support tickets (the irony!) expressing frustration that there wasn't a trial version of the product and in order to maintain the integrity of the experiment I didn't give in. I routinely sent the following response, although I admit I felt a bit sheepish every time I pressed send.

While I never felt great sending this email, ultimately this experiment was a defensive measure that was in the best interest of our current, paid subscribers.

Almost immediately after removing the freemium plan from our website we started to see a significant increase in paid subscribers... exhale. Here are the results of the experiment and what we learned.

Yup—but I was extremely wary that churn would increase, too. And it did.

Alongside the increase in new paid subscribers came a significant increase in churn—52 of the 180 paid subscribers we added ended up churning (28%). The vast majority of this churn happened very quickly—a new customer would sign up, quickly see we were missing some sort of feature they required, then cancel.

While it's a bummer that we saw churn increase as much as it did, the takeaway for me is the importance of letting customers experience the product for themselves before they're asked to pay—these customers could have quickly disqualified Outseta for not meeting their needs.

It's worth note that with our freemium model, churn was extremely low given our target market (about 2% per month). This makes sense, because customers had already implemented the product and in most cases started to grow before they moved onto a paid subscription. The churn we saw when offering the freemium tier was almost entirely driven by start-ups shutting their doors.

An impact that I hadn't anticipated was that the quality of my product demo calls increased significantly. Rather than prospects showing up and generally asking for a tour of the product, most prospects showed up incredibly prepared—many even brought an exhaustive list of detailed questions. There was no doubt who was very serious about evaluating Outseta!

I also noticed that our onboarding emails saw significantly better engagement during the course of this experiment—this also makes sense. Recipients had already paid for our product when they started receiving our onboarding emails, so they took them much more seriously. Their level of commitment to onboarding successfully was simply higher.

Another nice impact of having customers sign up directly for a paid plan is marketing attribution becomes that much more useful—you get a more clear sense of exactly where customers came from prior to purchasing. Here's where our new paid subscribers came from during the course of the experiment.

Support volume decreased, but it was gradual

Ultimately the goal of this experiment was to reduce our support volume rather than to optimize our revenue. This was also successful, although we didn't feel the impact as immediately as I expected to. The thousands of users that are on our freemium plan didn't simply disappear, but as you might expect most of those accounts are most actively engaged right after signing up for Outseta. As we got further and further away from the date when we removed the freemium offering from our website, support volume from freemium users scaled down.

Now that it's several months later, roughly 75% of our support volume is coming from paid subscribers—which is exactly what we were after.

There were definitely costs in terms of brand exposure

A negative impact of this experiment is that it certainly hurt us in terms of brand exposure. I know that many people came to our website, saw no means of trying our product without paying, and simply left. Without question that's a missed opportunity and hundreds of people that would have otherwise experienced our product didn't (and maybe never will). We were previously getting around 500 freemium sign ups per month, then saw around 75 paid sign ups per month throughout the course of this experiment—that's an awful lot of people that missed out on experiencing the product.

While that's the case this was all about bringing some sanity back into our business—exposure wasn't what we were after—more time to spend with our paid subscribers was.

We sustainably doubled our growth rate

When all is said and done and we account for churn, the end result of this experiment is that we doubled our growth rate. While sign ups from paid subscribers tripled, roughly one third of those churned leaving us sustainably with about double the number of new paid subscribers each month. That aside, we definitely brought some sanity back to the business which is what we were really after.

As I've reflected on this experiment, it's certainly reinforced something I've always known—very few start-ups experiment with pricing enough. I don't necessarily see the takeaway as "force people to buy a paid plan right away," but I certainly think this is fodder for being bold with the experiments that you run—the results may surprise you.

I also think it's worth mention that the strategy of going directly to a paid subscription was likely easier for us to pull off now that Outseta is 5 years old and has developed some degree of brand recognition and credibility. At an earlier stage, this likely would have been a bit tougher to pull off.

We've now concluded this experiment and are currently running a new one—offering a 7-day free trial where we ask for credit card information up front. Requiring the credit card is meant to be a filter so we only get sign-ups from people that are serious about adopting Outseta. And the 7-day free trial is meant to create some urgency, yet give prospective buyers the opportunity to self-disqualify themselves rather than needing to sign up and churn.

I'll be back in a few months to report of the results of that experiment!