A full-time salary at Outseta is $210,000 per year and everybody earns equity in the business at the same rate as our founders. 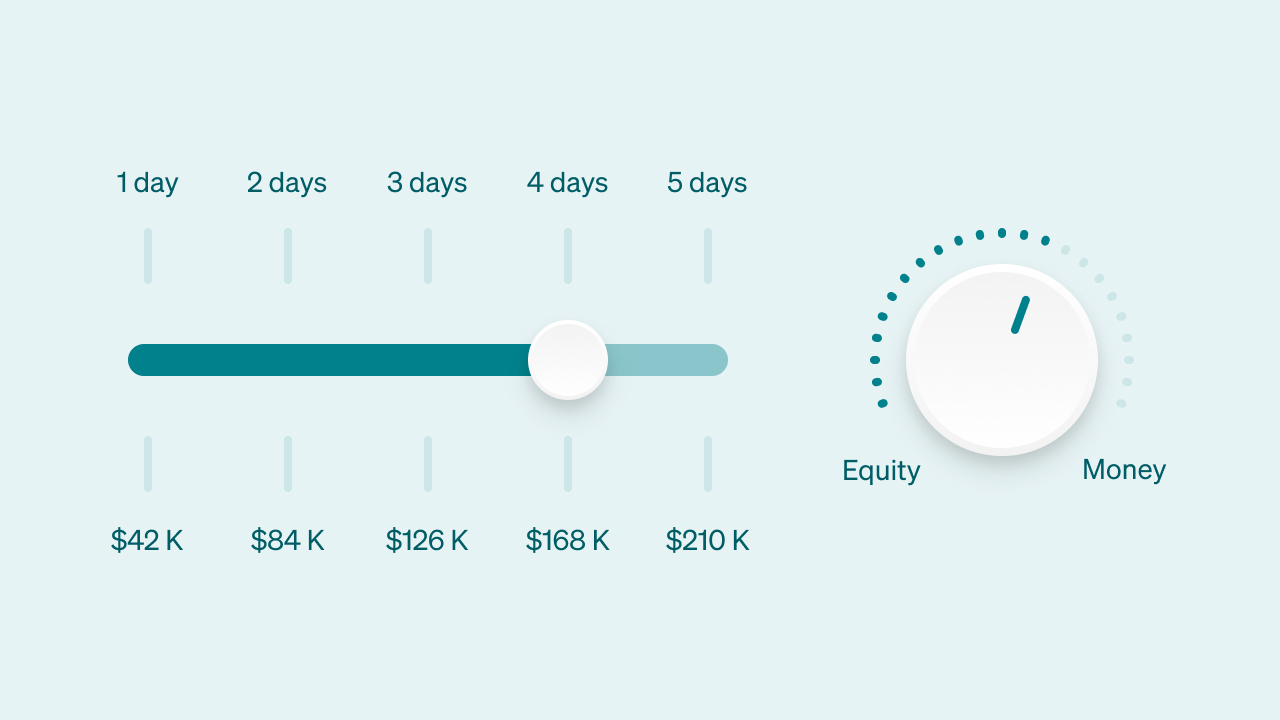 Since the day we started Outseta I've shared a lot about how we want to build the company—we've always had a unique organizational design and generally I think the predominant way of building tech companies is significantly flawed.

As our growth has accelerated over the past two years, it was time for us to revisit some of our original thinking and codify some aspects of how we want to scale Outseta going forward. This post shares some important milestones for us as a business as well as the output of some conversations we had this spring.

How we build Outseta has always been at the core of why Dave, Dimitris, and I chose to Co-found the company together—our fundamental ideas remain unchanged.

What we're sharing today doubles down on all these ideas—we hope that it helps other people that are interested in working with us understand how we'll operate going forward.

We've standardized a payment structure for everyone at Outseta

Let's cut right to the chase...

A full-time salary at Outseta is $210,000 per year. We think this is a healthy pay rate in-line with hiring excellent people.

While that's the case, there's no doubt that for some people we hire this will be better pay than they've received before and for others, this is below what they could earn on the open market. For example, all three of our engineers—Dimitris, Dave, and Bernard—are previous CTOs with 25+ years of experience building software. They could certainly earn more elsewhere.

How we choose to run and operate the business will appeal to some people and not to others—that's expected. But it's also important to note that there are two ways in which you can earn significantly more than your salary.

While profit sharing programs are becoming more common in tech, the combination of these opportunities is extraordinarily rare. Both represent an opportunity to earn significantly more than your salary.

Equally as important, we want to hire entrepreneurial minded people—we think these people will thrive at Outseta. With that in mind, we wanted to land on a structure that gives us the ability to work with talented people in a part-time capacity so they have freedom to work on their other projects or interests as well. Our structure provides a pre-defined pay rate based on the number of days you work on Outseta each week—and you have the flexibility to work for equity in the business to the extent that you want to as well.

We think this is really appealing for a number of reasons.

As we mulled all of this over, our biggest concern was that this does make it difficult for us to recruit more junior people into the organization—people whose experience simply doesn't warrant the $210,000 salary. We considered introducing a second, similarly tiered structure for less experienced hires but ultimately decided against it. It's certainly something we may revisit in the future, but for now we're staying the course—we intend to hire great people, and it's expected that everyone chips in in areas like customer support that are typically lower paid positions in most organizations.

On a personal level—no more consulting!

We have bootstrapped Outseta since day one—on a personal level that's meant that I've spent the last 5+ years consulting in various capacities to cover my financial needs. I wrote marketing plans. I helped companies with positioning and messaging. I acted as an interim CRO. I had a wonderful array of experiences and I'm supremely grateful for all of the companies that I had the pleasure of working with. But damn am I excited to give Outseta my complete and undivided attention. Juggling jobs for 5+ years really weighed on me.

I want to share a little bit about my personal path to get to this point, in hopes that it's helpful to some other founder who may be contemplating the idea of bootstrapping a hugely ambitious software product to life. I started out working on Outseta two days per week, while consulting three days per week—my first consulting contract was a retainer for $6,000 per month. I generally scaled down my consulting work over the last five years as Outseta's revenue and ability to pay me grew, but it wasn't always a straight and steady path.

At one point in year three, Outseta was struggling and I found out that my wife and I were having twin boys—one was expected, but his twin was something of a "bonus" child. As you might expect, that turned up the dial when it comes to the financial stress that my wife and I were already feeling. At that point I actually took a full-time job, devoting nights and weekends to Outseta. Later, I lost my primary source of income when Covid started and made the tough call to devote almost all of my time to Outseta, trying to push the company forward despite it being a bit premature. In retrospect this was a huge step in getting Outseta to where we are today.

As of July 1, I'm devoting 100% of my time to Outseta and am earning a salary of $126,000 annually. This represents the three days per week of cash compensation plan, and I'll continue to grow my equity stake in Outseta two days per week. I'm absolutely thrilled to write that sentence—it's been a grind to get here.

While that's the case, I share this as something of a cautionary tale. When I was 28, I was the VP of Marketing at a Sequoia backed SaaS company making $200,000 per year. Now at 36, I'm making $126,000—take that as you will. During that time I went from being one of my highest earning friends to one of the lowest. I watched as my friends had careers take off, as they bought fancy houses, as they provided things for their family that I still simply can't. I'm quite good at not comparing myself to others, but I'd be lying if I said I didn't wonder along the way if I was making the right decision.

I know many people will read this and think "why would you do that?" Others will say "$126,000 sounds like a lot more than "default alive" to me," and that's totally fair. But I am 36, I have two little kids and a wife at home, I have a mortgage, I live in California, and I have no benefits—I can assure you it's not glamorous.

Ultimately starting Outseta has been a massive financial setback in the short term, but I'm playing the long game. I own roughly 24% of Outseta today, versus the equity grants of around .5% that I was previously issued in companies as a VP.

I could not be more excited to share that James Lavine, our lead designer, has also scaled up to focus on Outseta four days per week as of July 1. James is responsible for the design of our software, website, and brand.

No one epitomizes what we're hoping to achieve with our new payment structure more than James. James started working with us back in 2018—his first agreement with Outseta gave us 20 hours or his time each month. We could only afford to pay him $1,000 per month for 10 hours of his time, so we compensated him for the additional 10 hours each month in equity. He's had a full-time job all along, but over the course of our working relationship he made some supplemental income and built up about a 3% ownership stake in Outseta in a very part-time capacity. This is way beyond what most tech execs are offered in their full-time positions.

With James leaving his full-time job and now working with us four days per week, we're going to be able to push so much faster on both the product and marketing sides of our business. He's going to help us make inroads in the Webflow community in ways that I never could, and he's going to make our software so much more user friendly for our customers. While James and I are both giggling-on-the-floor excited about all of this, it's ultimately Outseta's customers that will benefit most.

These are big changes for us as a company and we wanted to take a moment to celebrate these milestones with you. It's important to note that no one at Outseta is currently earning the full $210,000 salary—we're all still working to various degrees for cash and equity compensation. But we have a structure that gives each of us the flexibility to work on Outseta on the terms that work best for us as individuals. We think this structure will appeal to many people and will serve as a pretty unique recruiting tool that will give us the opportunity to work with many talented people.

The graph above shows the trajectory of our revenue growth since we started—with that much more capacity and a slope like this, we're excited to continue to ramp up the pay for our team and think we'll be adding new team members in various capacities sooner rather than later.

Cheers to our next chapter! Your support means more than you know.